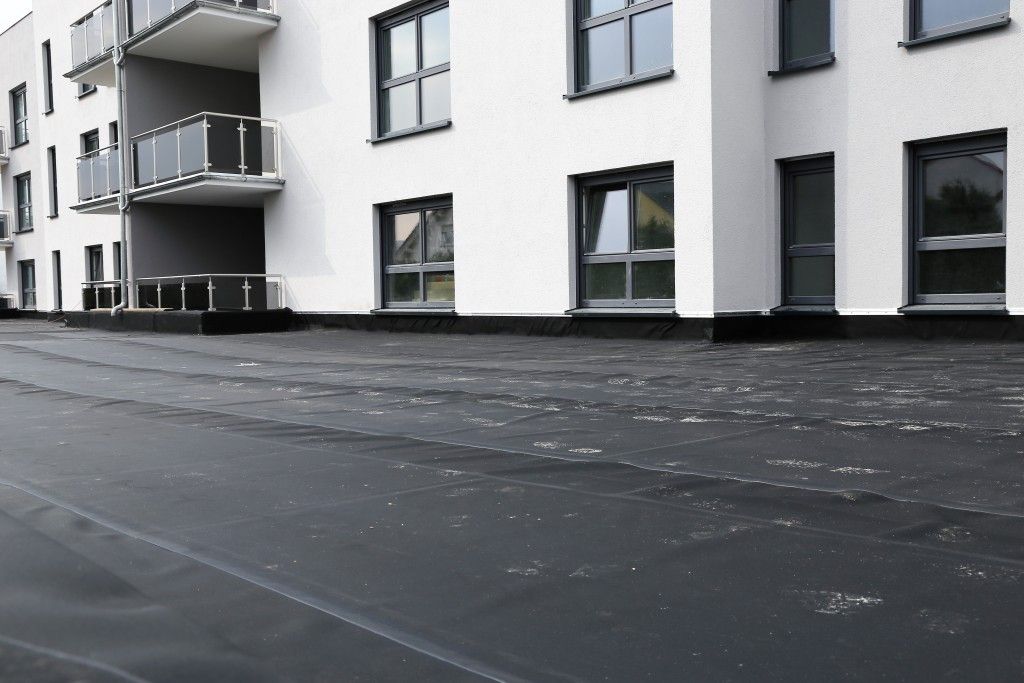 There are, in essence, two different types of roofing options for buildings: shingled rooftops for buildings of small to intermediate sizes, and flat roofing systems for longer commercial buildings. The reasoning is one of geometry: a long building cannot viably hold a shingled roof on top of the flat roofing system needed to cover the expanse, because water will quickly become trapped between the two surfaces – leading, ultimately, to system failure. Long before this failure, you will be beset by constant leaks because of the inevitable space between the shingles and the flat underlying surface.

The Options for Commercial Buildings

Although cities do have regulations in place regarding the proper geometry of shingles placed on flat roofs (for commercial buildings in particular); a much better alternative is to use one of the primary roofing systems developed specifically for commercial buildings. The two primary choices are the ethylene propylene diene monomer system (EPDM), or the thermoplastic polyolefin system (TPO). In the following, we’ll examine the strengths and relative weaknesses of the two, so that you can decide which is the best commercial roofing system for you.

In what regions should you consider an EPDM roofing system? It depends on the climate. For example, because EPDM is basically a synthetic rubber, vigorous rainfall comprised of hail won’t indent the surface – the hail will bounce off harmlessly. This energy transfer allows the ethyl polymer diene monomer system to outlast virtually any other type of roofing system. You can pretty much count on the structural integrity of the roof to hold up under years of hailstorms.

Another positive attribute of the EPDM roofing alternative (as opposed to TPO, which we will explain in the following section) is that, when repairs are necessary, there’s a distinct ease with which these can be accomplished when compared to the TPO system. Since it is a synthetic rubber, there’s no welding involved; the latter requires a surprisingly unwieldy system to get the necessary amount of electricity to the welding tools – especially for a large building.

When compared to the EPDM option, TPO roofing is relatively new – however, it is rapidly rising in popularity for several reasons. Perhaps the most important reason that it is starting to become the preferred alternative by industry roofing experts has to do with energy efficiency; it is comprised of a reflective material, which can significantly reduce the energy costs associated with summer cooling. On the other hand, EPDM is an absorptive material. This means that a commercial building’s cooling systems must work harder to meet the indoor temperature requirements, as the roof introduces more heat inside.

One of the few downsides of thermoplastic polyolefin system is that it must be welded together. This feature accounts for its robust resilience; however, it also means an added expense in maintaining an electrical power source during the entirety of installation. Basically, the exceptional durability is not cheap – but for many, it is a worthwhile expense for the tripled protection it provides against puncture damage (when compared to EPDM).

There’s little question that either EPDM or TPO offer excellent protection as commercial roofing options. The primary factor then, in deciding which one to choose, is incumbent on climatological considerations. If your commercial building enterprise is in Southern California, for example, then you will want a roofing option that minimizes your solar profile – which pretty much means TPO. However, the situation isn’t that simple, because if you use solar panels, a TPO roofing system may cause them to fail prematurely by over-burdening their capacity (TPO reflects sunlight back into the panels). Thus, even in a sunny climate, you might opt for EPDM if solar panels are being employed on the roof, despite EPDMs tendency to absorb sunlight and increase your energy bill.

Overall, the cost of either is comparable insofar as the initial installation is concerned; however, repairing the albeit more durable TPO could be more costly because of the electricity required to weld the panels. EPDM, additionally, has been shown to outlast TPO by a solid decade – but this depends on the geographical location. For more information on roofing options, don’t hesitate to drop us a line.

Spicer Bros. Construction, Inc. has been helping people all over Delaware since 2002.